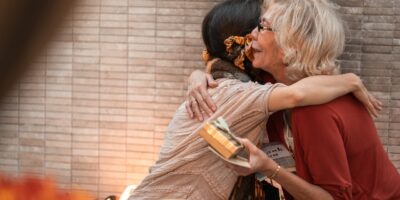 There are some topics that we would like to not make a blogpost about, because they should no longer exist in the 21st century. Today, the 24th November, is a day that is dedicated to such a topic – the day for the elimination of violence against women. Unfortunately there is still a big need to address this issue as for example the evaluation of the German Federal Criminal Police Office 2019 shows.

Therefore we talked to Emily and Anna from the project ANNA NACKT, who specifically work on the topic of digital violence – an area that has become increasingly present with the ever-increasing distribution of digital and social media.

Dear Emily and dear Anna! Thank you for taking the time to shed a light with us on this very specific topic of digital violence against women.

With the ANNA NACKT Project you and your team created a platform for people whose private content (for example nude pictures) has landed on the internet against their will. What is the idea and the goal behind the platform?

How would you feel if your most intimate, private pictures were found online by an old school friend? Pictures you’d sent via a secure messaging platform to someone you loved and trusted? It’s a violation, and the last thing you’d want to hear when you reported this to the police was: “are you sure you did not not upload these pictures yourself?”

Through personal experience as well as hearing about the experience of others has taught us that those who are meant to support people affected (i.e police and law enforcement), often do not know what to do, instead blaming the “victims” for what happend. This lack of understanding and – more troublingly – empathy towards those who experience online abuse is the reason we started the ANNA NACKT project.

We started by providing easily-accessible and practical help, as well as support and understanding, to people who experience this form of online abuse. However, we quickly realised that this will not have a significant impact on the much bigger problem of digital violence. Therefore, we’re currently petitioning the German Government to change its laws around cyber violence, with the ultimate goal of creating a free and open internet that is safe for all.

Taking a closer look at the phenomenon of digital violence: How would you define it and where/how does it usually manifest?

The most commonly known forms are hate speech, cyber-stalking and the sharing of abusive material. Cyber violence (also known as online or digital violence) refers to forms of violence that use technical aids and digital media (e.g. phones, e-mails) and/or take place in the digital space (e.g. on social media platforms). However, there’s no broadly adopted definition of it.

In simple terms: it’s violence connected to the use of hardware, software and/or the online world. More recent forms include the use of Artificial Intelligence, e.g. deep fake software to create pictures and videos that look deceptively real. This also demonstrates why it is challenging to find a common definition: the forms of cyber violence change quickly.

It is important to note that everyone – women, men and non-binary individuals – are affected by cyber violence. Though statistically in most cases, the perpetrators are men and the survivors are women.

Women and girls also often experience more severe forms of cyber violence such as sexist hate speech (e.g. rape threats), image-based sexual abuse and cyber-stalking. This is why organisations such as the UN and the EU conduct specific research into cyber violence against women and girls.

A person with a cyber stalker often knows the stalker in “real life”, and the pictures someone shared illegally online, have been taken in real life.

Plus the impact is real: people feel more anxious when walking down a street, they have panic attacks, and they have to have real conversations with people in their life to explain why their nudes can be found online.

Still, the topic is often played down and not taken seriously. What are your experiences, how big is this issue, how often does sensitive content end up on the internet?

It’s impossible to know the size of the problem, as so often these crimes go unreported. Organisations, such as the bff – Bundesverband Gewalt gegen Frauen, have been demanding an independent study on cyber violence in Germany for years (something we absolutely support).

To give some more perspective: a recently discovered deep fake software created more than 100,000 deep fake nudes (nudes of women that are not real but look deceptively real) based on just a profile picture.

How does digital violence impact on those affected? And which advice would you give them to handle such a situation?

The impact can be profound, and those affected often experience mental health challenges (most commonly anxiety and depression) and/or damage to their livelihoods, such as job loss. In many cases, people become silent, fearing to stand out in any way, and we lose important voices in society.

Our maybe-too-obvious-but-very-effective advice is to breathe and talk to someone you trust. We promise that the situation will pass, and you will find a way to deal with it (trust us, we’ve been through it). Once you feel calm, it’s time to do what you can to take back control (remember, asking for help – doing this is not just suggested, but recommended). You can contact the websites, submit a police report, and collect the evidence.

It can be helpful to remember you’re not alone in feeling panicked and scared: Amnesty International have found that at least 41% of women who have been abused online fear for their physical safety, and 24% feared for their family’s safety (online mobs who attack women often issue detailed and graphic threats against their children).

Depending on your situation, you can turn to different organisations:

If your nudes have been leaked, ANNA NACKT has a full step-by-step guide on what to do to get them removed (DE & EN):

To THE GUIDE FROM ANNA NACKT

Advice and support for those affected by hate speech can be found on Hate Aid’s site (DE only):

Those who have been cyber stalked, can find help at Frieda Frauenzentrum (DE only):

What would you wish for in the future? What should be done to tackle this problem?

We wish for an internet that is free and safe for all.

To achieve this, we need to become serious about combating cyber violence. We need to really listen to people affected, to prosecute perpetrators, to provide law enforcement with the required resources, and we need to hold online platforms, such as social media, porn-websites and websites with violent content, accountable for the content they share.

Emily and Anna from ANNA NACKT and your team from vostel.de