On tour with the Berliner Obdachlosenhilfe | A field report

We are launching our theme month with a visit to the Berliner Obdachlosenhilfe, which we accompanied on an aid tour in October. The non-profit organization belongs to the range of mobile homeless aid, which means that it primarily provides services directly to the people on their tours at various stations in the city. In this article we give you an insight into the work of this organization and take you along with us on our volunteering tour.

What is the Berliner Obdachlosenhilfe?

The Berliner Obdachlosenhilfe e.V. is a non-profit organization and has been conducting aid tours on the streets of Berlin since 2013 to provide homeless and people in need with warm food, drinks, clothing, sleeping bags, hygiene articles, as well as an sympathetic ear.

Each year, more and more people live on the streets of Berlin. Very rarely does anyone take care of them, talk to them or cook for them. We, the Berliner Obdachlosenhilfe e.V., are a non-profit organization that would like to make a contribution towards social coexistence at this point.

For this purpose, volunteers currently travel three days a week – Wednesday, Saturday and Sunday – to various places in Berlin’s districts: Leopoldplatz in Wedding, Alexanderplatz in Mitte, Kottbusser Tor in Kreuzberg and Hansaplatz in Moabit.

What does the organization provide for homeless people?

The primary goal of the Berliner Obdachlosenhilfe is to provide people on the streets with basic necessities of life. In addition to supplying items such as hot meals, drinks and fresh clothing, their tours also serve as a regular point of contact for their guests, where they can talk to others in a safe environment or approach the volunteers with any problems they may have.

Since 2021, the association has also employed two social workers, Maya and Stefan, who specifically support clients in solving their problems. This often involves applications for unemployment benefit, problems with health insurance, debt counseling, or support in dealing with psychological difficulties and everyday problems. Ideally, they help their clients find their way out of homelessness over a period of several months. Given the tense housing situation in Berlin, this does not always work, but their support is nevertheless an important anchor for the clients.

Affected people can contact Maya and Stefan via email or phone or come to one of the open office hours (every Tuesday & Thursday 10am-4pm at Exerzierstraße 23, 13357 Berlin).

Our field report: On the road with the Berliner Obdachlosenhilfe

Enough about the facts. How does such a tour at the Berliner Obdachlosenhilfe actually work? Who are the people on site who help out and who are the guests who are taken care of? We’ll give you an insight and take you with us on a tour:

Right after arriving, we met many other helpers (including a Dutch school group) and tasks were assigned directly while we were able to decide whether we would rather make sandwiches, pack boxes with hygiene items, sort clothing donations or help in the kitchen with cooking. Once divided into groups, we immediately got into conversation with the other helpers and the time of preparation flew by. Here you can see a few impressions: 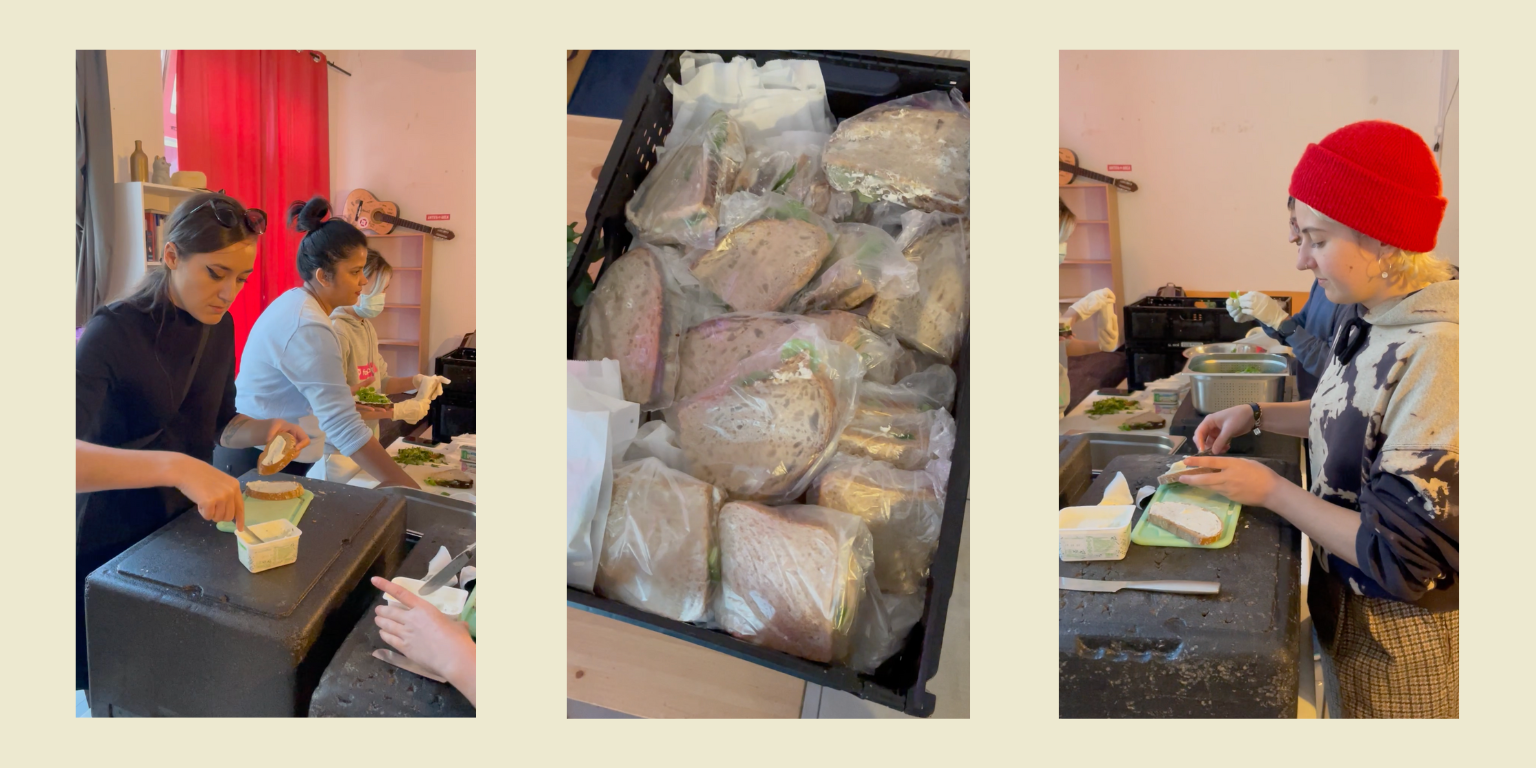 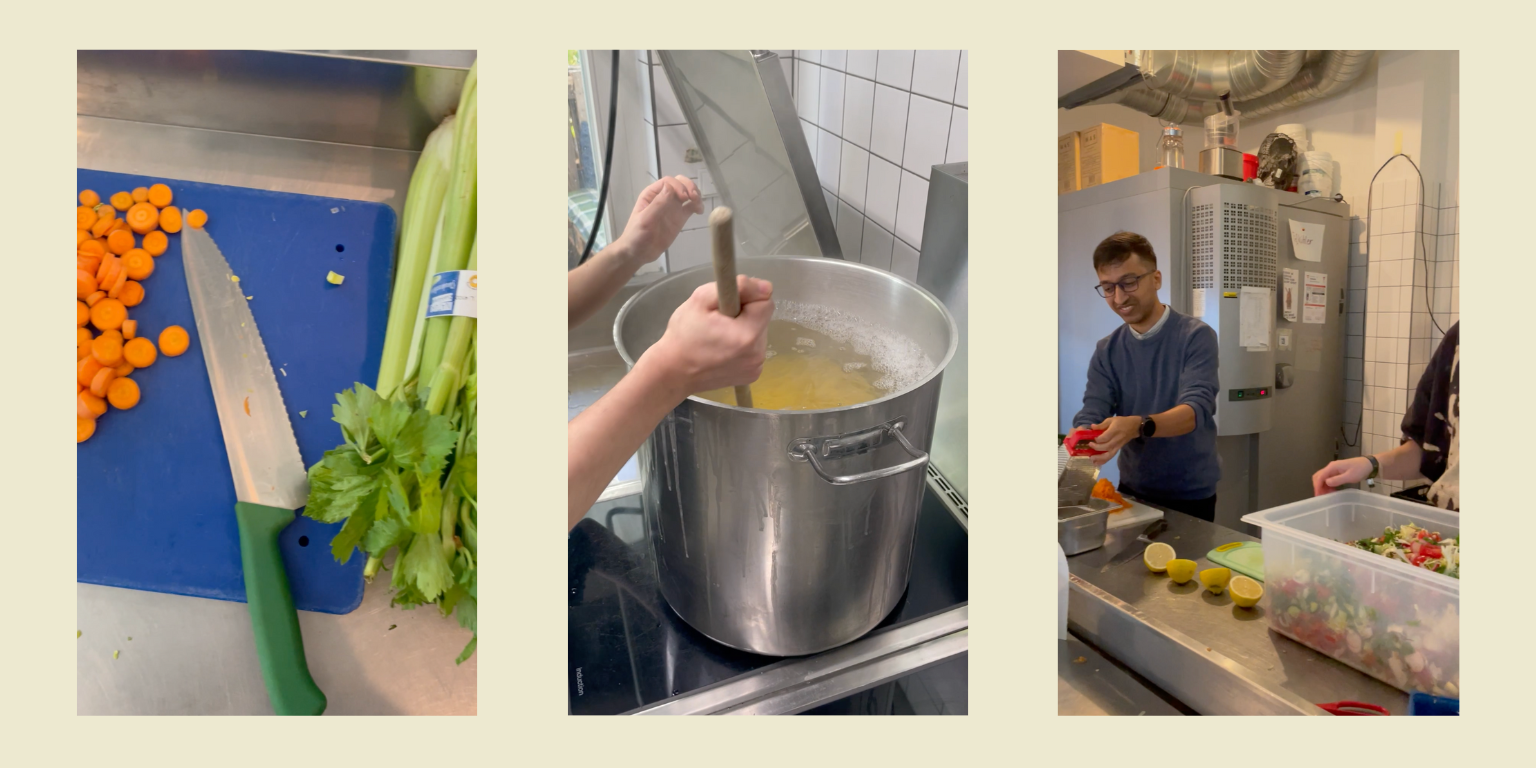 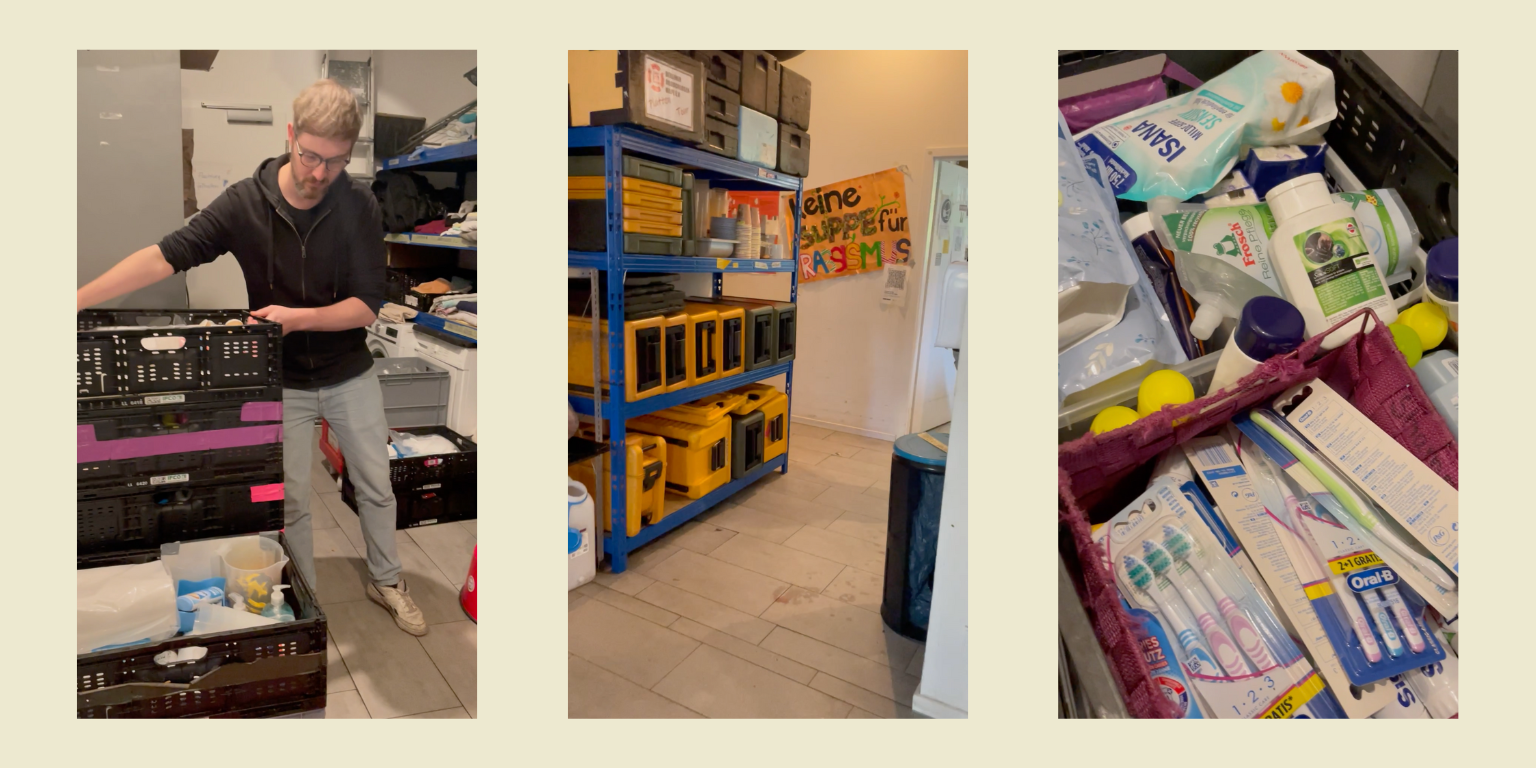 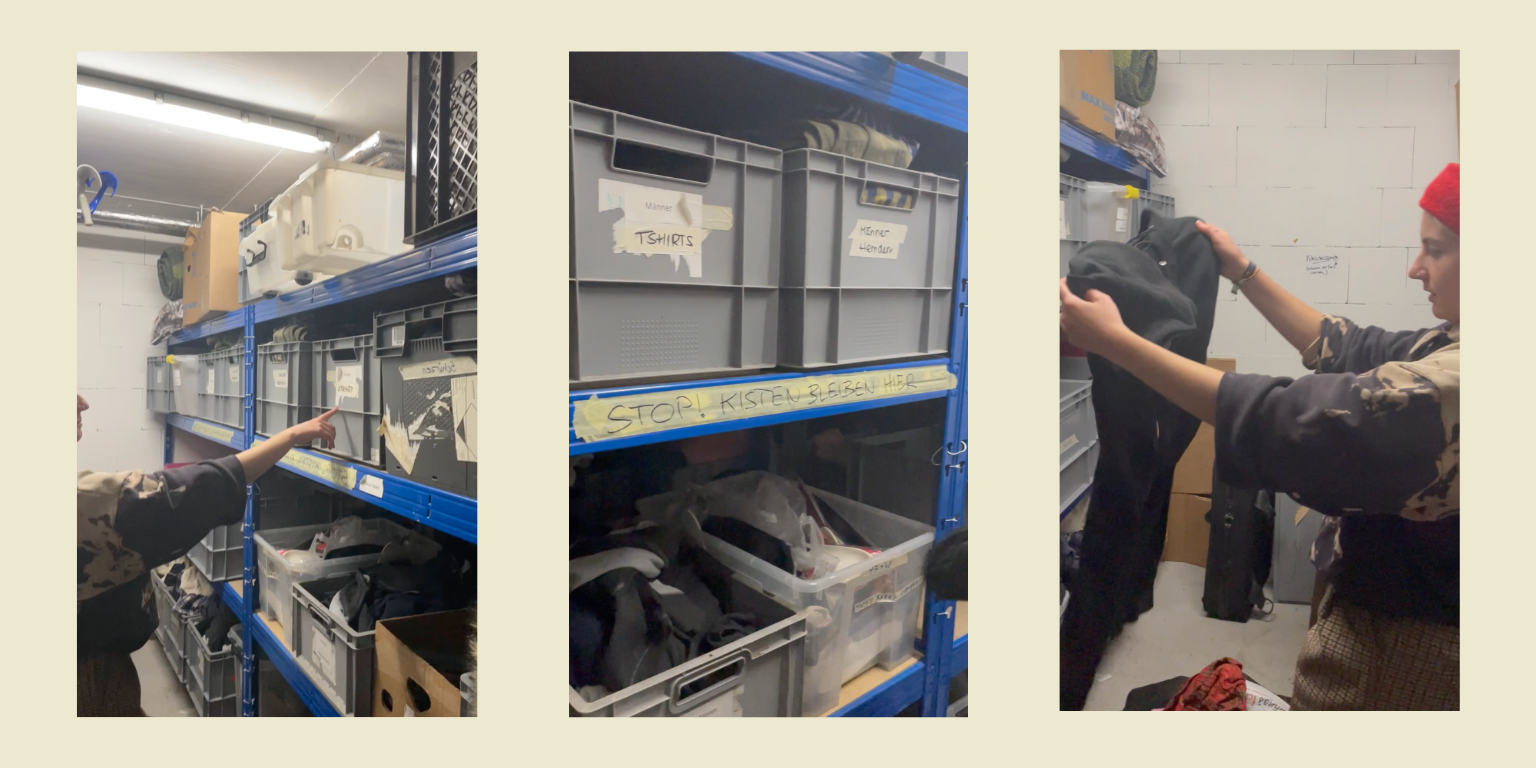 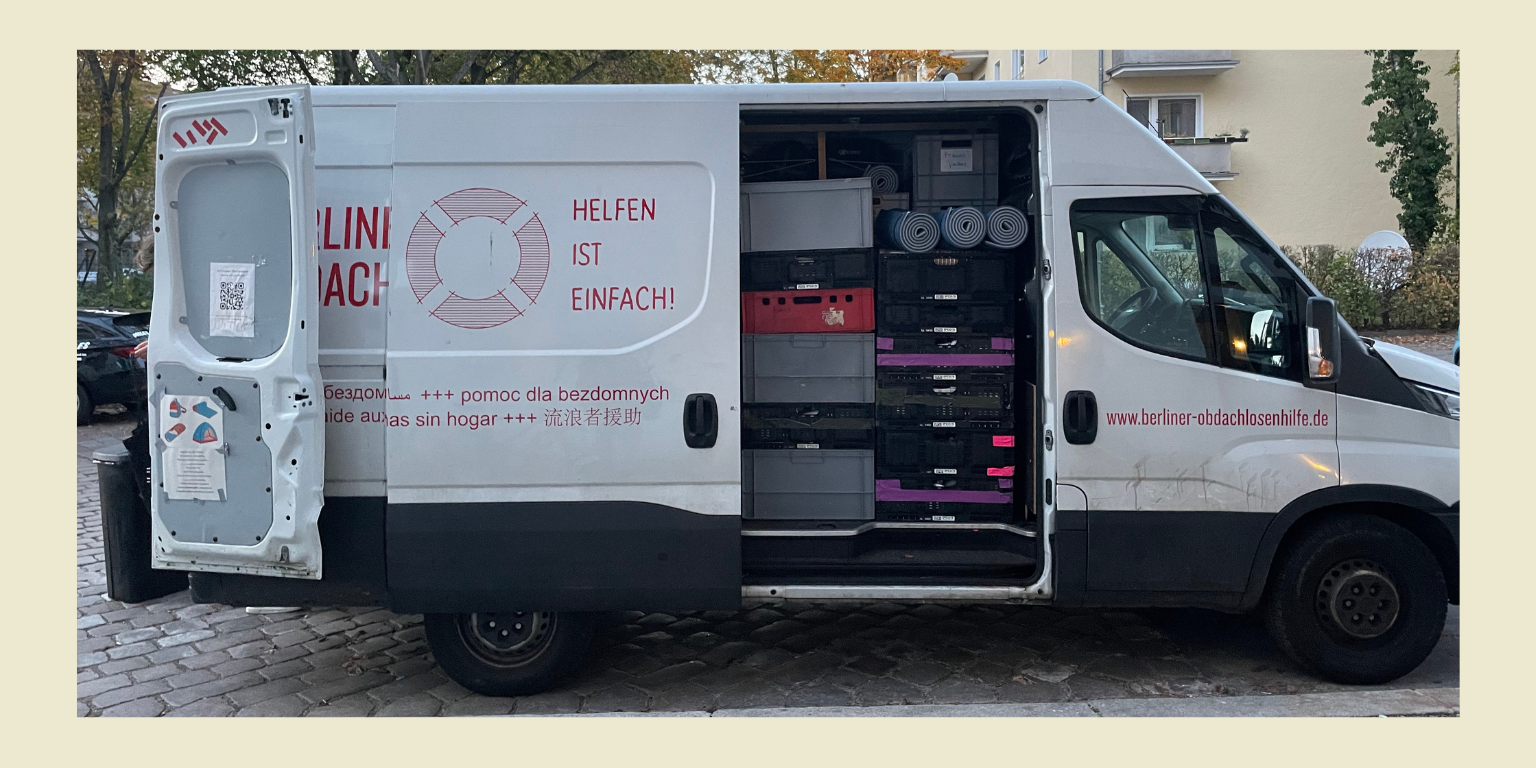 // Picture 1: In total we prepared 5 boxes of sandwiches.
// Picture 2: We cooked potato gratin, pasta, salad – guided by the cook, who himself lived on the street for a long time.
// Picture 3: Boxes with hygiene products such as toothbrushes, shower gel and toiletries were also provided.
// Picture 4: We also sorted clothing donations and put them together for the tour.
// Picture 5: Finally, everything was loaded into the van before it went on tour.

The tour with food and clothing distribution

Now it was time for the first station of the evening: Leopoldplatz. Here we had to set up the tables and benches, place food and drinks at various stations and, of course, distribute the tasks to the volunteers. This was done by the volunteers, who have been with the Berliner Obdachlosenhilfe for a long time and therefore know exactly what needs to be done. At Leopoldplatz, we were supported by other volunteers who offered a helping hand. We distributed food, hot tea and coffee, as well as pastries and desserts to about 50-60 people.

The guests on site were very diverse: from young students to migrants to pensioners, there were people from all kinds of backgrounds and life situations. With some of them there were short conversations, but many also gathered in small groups and in some cases seemed very familiar.

After 1.5 hours we packed the food, tables and benches back into the van and the transporter went on to the second station at Kottbusser Tor. Here, in addition to food and drinks, clothing donations were distributed to the people. Again, the helpers were on site for about 1.5 hours.

The end and our conclusion

Finally, it was time to go back to the organization’s facilities, where the van was unloaded and dishes and containers were cleaned and tidied up to prepare everything for the next tour. This is an important part aswell. To round off the day, there were drinks and some nice conversations with the rest of the helpers who were still present during the clean-up.

Even though it was a long evening for us, we were happy to be there and to interact with so many lovely helpers. In addition, it was a very exciting insight into the regular and important work of the Berliner Obdachlosenhilfe. We are happy to join one of the next tours again.

How you can support the Berliner Obdachlosenhilfe

Be part of a tour

One of the most important factors for the Berliner Obdachlosenhilfe to provide regular services is the support of volunteers. You can join one of the tours every week. Which tour you join exactly and for how long is completely up to you. Preparations usually start around 2pm, the first tour starts around 6pm, the second tour around 8pm. The clean-up usually starts at 10pm. You can register directly for a tour at vostel.de.

Support with a donation

Since the association is completely financed by donations, you can also support it without actual active participation. In addition to monetary donations, you also have the option of donating items. However, you should make sure to take a look at the current list of demand for donations in kind beforehand.

We hope you enjoy your involvement with the Berliner Obdachlosenhilfe!
Your vostel.de Team